Haven’t seen your buttons green on Skype recently so may try and phone over the weekend.  I have a rosy assumption that life carries on just about as normal in your pastoral existence, and trust you are ok.

Apart from millions of train commuters and tourists who have disappeared, London doesn’t have a ‘kin clue what’s coming. Brixton has remained as crowded and busy as ever all this week. People seem to think as long as they have got ample toilet roll they can forget the rest. The daily statistics will be pretty depressing in a couple of weeks’ time. I have been taking the attitude that I could well already be a carrier without knowing, and wouldn’t want to spread it about. The distancing in the office has been a bit comical at times.

In the last couple of days, the business decamped to all our homes, and the tech seems to be holding up surprisingly well. I have full access to the office server and multi-way video conferencing has become the norm. The phone system we installed a few months ago has been very useful, in that we have taken the handsets home, plugged them into our routers, and we can transfer calls between London Chichester and Cambridge as if across the desks in the office. I have a nice workspace in my spare room in front of a big window that gets the sun all day, with all the kit on  my drawing board, which I last used for work in there in 1991, when I used pencils and other tools that have more in common with 1920 than 2020. All my family swapped photos today of their workspaces at home. Having felt I was doing dodging bullets a bit too much, it’s been relaxing not to have gone out today.

Fortunately I gently increased my food buffer back up to previous no-deal Brexit levels during January and could deal with 2 weeks confinement if needed. Fortunately my Mum has very good neighbours around her, so I don’t have to worry on that account. She was against the idea of my visiting for a socially-distant walk this weekend, so is getting set up on Skype instead.

Feel free to call at a time of your choosing – I won’t be far away!… well I did make it as far as Tesco this evening, where all was in order with toilet rolls for all.

Sorry I didn’t pick up the phone message the other day.

I don’t know if you’ll be able to watch this link where you are, but Brixton Windmill’s extra flour production featured on this evening’s BBC London news.

it’s at  around 23:40 min towards the end, but the beginning is also worth a look to see how they have built this enormous hospital at ExCel in the last 10 days, which will start admitting patients tomorrow.

Lovely to hear from you, and that you’re ok. I’d be happy for you to use my report. With the closedown of the restaurants and venues, Brixton has finally slowed down. It’s now a question of how long other non-essential business will be allowed. During the last 10 days all the community groups called off all events and gatherings, but at Brixton Windmill we decided to continue with the milling, weekly Tai Chi and monthly gardening for as long as we can.

The milling volunteers are really motivated with a ‘feeding the nation’ spirit. I took a delivery to a deli in Herne Hill last week. The customers were queuing along the street and the shop assistant was so please to see me, and I suddenly felt proud that we were helping to line some shelves, even if was a modest 20 bags (but it’s probably more than Tesco had left on their shelves). They have placed an immediate order for 50 more. With the scrapping of events and education, this is about the only non-grant aided income left now.

I attended the weekly tai chi yesterday – a lovely morning, and nice to get out for the first time since Thursday. We have as long as the parks remain open, it’s a relatively un-risky activity, and with everyone stuck at home, there was talk of starting a mid week session. The trouble is, London’s graph is on he same way as France and Spain where such things have already been stopped.

It was a beautiful morning in the park, and nice to see the others, and I was so pleased to have this opportunity to really relax… until I was disturbed by our Chair who wanted me to help with troubleshooting something. I was absolutely furious about being expected to include tai chi with the usual multitasking – the angriest I have been for a long time. Anyway, it turned out the the mill had stopped working. I was still angry, as I don’t really know that much about the equipment anyway, and the whole situation was blowing my social distancing efforts, but the young woman who was leading the millers group (one of our youngest volunteers) was coming up with some perceptive observations about why the machine wasn’t working. She was also being very responsible about the situation so I quickly knuckled down to tinkering with this and that, and we found we could get it working again.

I was completely out of tune with the tai chi on returning to it, but with a ton of grain being delivered this coming week, it’s a bit of a race against time between milling and the possibility of having to close down. Anyway, after getting home with a blissful absence of multi-task requirements, I put together one of my videos which records the day (minus the drama). I have an uneasy feeling it depicts things we’ll soon not be able to do (e.g. you’ll see that although the millers are wearing hygiene gear, they are in rather close proximity at times). 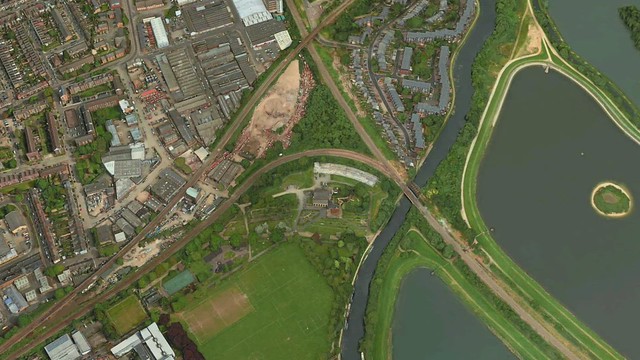 We had a food hygiene inspection a couple of weeks ago and got 4 stars out of 5.

As for the rest of it, I know when to avoid the supermarkets (within 48 hours of any government announcement ha ha), and all the little corner shops are fine anyway. This morning I picked up a hot freshly baked baguette from one of them before breakfast as I often do. Perhaps the whole thing will be good for people discovering their corner shops. In many ways, I have it easy. It must be very hard for families around here in small homes to deal with the shut-down, hygiene precautions etc.

Your veg patch in the orchard sounds ideal. I look forward to the day when I have the pleasure of helping you in it, whenever that may be. Keep well,

( photo from Nick’s Balcony in Brixton)